Reap the Benefits of Glutathoine 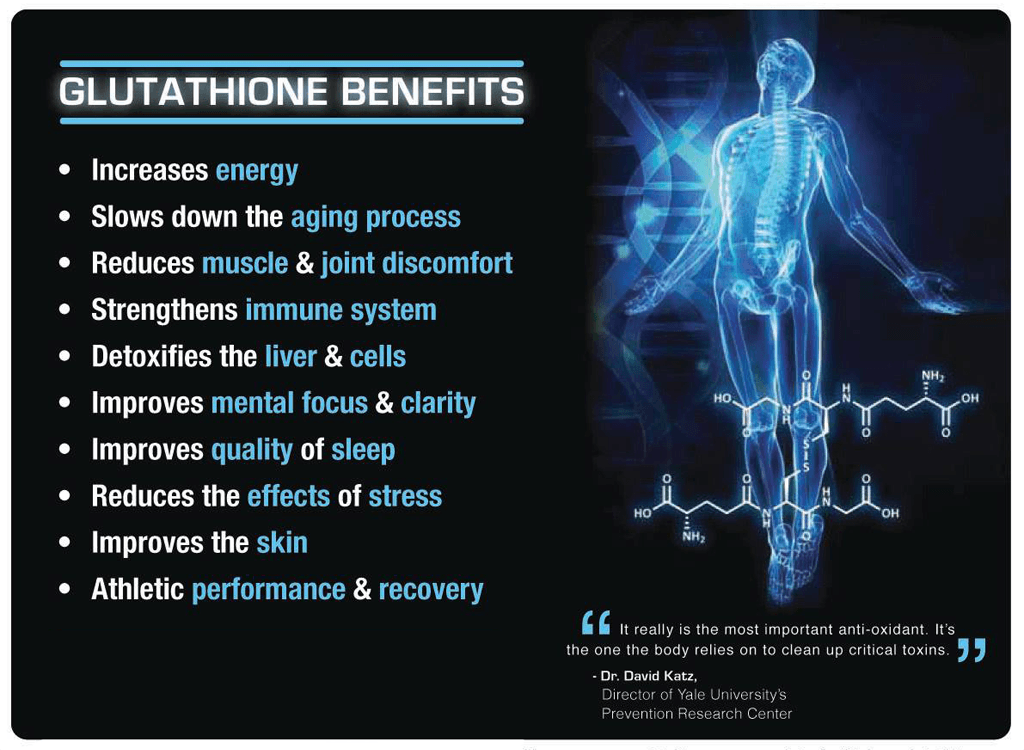 Vitamin C, vitamin E, beta-carotene, and other antioxidants are on everyone’s radar, so it’s ironic that we don’t hear much about glutathione considering it’s the body’s master antioxidant—and so much more.

That’s probably because you can’t go to your health food store and buy glutathione in a bottle. Well, you can, but it’s not recommend as it’s poorly absorbed and most, but not all of these supplements have little to no effect on glutathione levels in the body. That said, you can and should use more creative means to boost glutathione production as low levels of this crucial compound dramatically increase your risk of disease and vulnerability to toxins.

Antioxidants are nature’s antidote to oxidative stress, the accumulation of free radicals that underlies a vast number of diseases and the functional impairments associated with aging. Free radicals also contribute to the many undesirable cosmetic changes that we associate with old age. Antioxidants donate electrons to quench free radicals, ultimately protecting cells and mitochondria (little factories inside our cells that generate energy). If glutathione is depleted in a cell, it will lead to cell death. Glutathione and its related enzymes are our most prolific antioxidants and in addition to directly scavenging free radicals, they also reactivate other antioxidants.

But that’s just one of the benefits of glutathione. It also plays crucial roles in the immune response, DNA repair, mitochondrial function and the detoxification of drugs, chemicals, heavy metals, radiation, metabolic wastes, and other toxins and carcinogens. Glutathione also plays a role in inflammation as the ratio between oxidized and reduced glutathione in the body is indicative of not only overall toxicity, but also inflammatory response. Low glutathione levels are associated with chronic inflammation, mitochondrial superoxide production and oxidative protein / DNA damage.

Given this broad range of activities, it makes sense that glutathione depletion is associated with disease and aging—and that increasing glutathione levels is not only a smart move for health maintenance, but also an effective therapy for a host of serious diseases.

Boost Glutathione Levels With Food and Other Supplements

You can also increase levels of this master anti-oxidant by supplying the body with the raw materials required for glutathione production.

Leading the list of glutathione precursor supplements is N-acetyl-cysteine (NAC). This natural derivative of cysteine is so effective that it’s used in emergency rooms to treat acetaminophen (Tylenol) poisoning and to thin mucus in the lungs. (NAC is also effective for allergies, memory loss, and Parkinson’s disease.)

Alpha lipoic acid also ramps up glutathione synthesis and significantly enhances detoxification, and we use it as part of our Nourish Balance Thrive personal wellness program, along with selenium and silymarin, to treat hepatitis and other liver diseases. Research suggests that the “sleep hormone” melatonin also boosts glutathione status, this by stimulating production of the antioxidant enzyme glutathione peroxidase.

The typical recommended dosages for these glutathione-boosting supplements are: NAC and alpha lipoic acid 200 mg of each 1–3 times a day, plus daily doses of selenium 200–400 mcg; silymarin 900 mg (for healthy liver function and improved detoxification); whey protein 1-2 scoops (added to smoothie, or with almond, hemp or coconut milk); and melatonin 3 mg at bedtime.

While these targeted nutrients improve systemic glutathione status, some conditions call for more intensive doses. This can best be accomplished by administering it intravenously (IV therapy), thereby bypassing the digestive tract and efficiently delivering it to target tissues.

Intravenous glutathione theraphy is particularly good for those who are: recovering from strokes and those with hepatitis, help those who wish to stay as healthy as possible throughout the arduous medical treatments such as chemotheraphy and radiation, battling Lyme disease and neurodegenerative disorders such as Parkinson’s disease, ulcers, inflammatory bowel disease, diabetes, pancreatic inflammation and many other other chronic illnesses—conditions associated with dramatic increases in oxidative stress and depletions in glutathione. IV glutathione isn’t a slam-dunk, and for these conditions it’s typically used in conjunction with hyperbaric oxygen and other therapies.

Glutathione is also an excellent treatment for emphysema, chronic obstructive pulmonary disease (COPD), cystic fibrosis, and other serious lung diseases, but again, getting therapeutic amounts into the lungs is a challenge. The solution: nebulized (converted into a fine spray) inhaled glutathione. Inhaled glutathione requires a prescription and can be ordered from compounding pharmacies.

Other Benefits of Glutathione

** This article is not meant to serve as medical advice.